Demand for hops has surged in recent years, due to the growth of hoppier craft beer styles, such as India Pale Ales. More recently, craft beer drinkers’ obsession with different brews has a lot to do with the wide range of incredible flavors and aromas derived from different kinds of hops.

The earliest recorded use of wild hops in beer was recorded in 822 in France, while organized hop cultivation didn’t begin until the 1100s in Germany. Today, approximately 26 percent of the world’s hops are grown in the U.S., while 36 percent are grown in Germany. Typically, German and Czech hops are known for their floral flavor, while in the U.K., hops have an earthy flavor. According to the Hop Growers of America, Washington, Oregon and Idaho are the top three states in the U.S. for growing hops.

The hop market can generally be divided into two categories – aroma hops and alpha hops. Aroma hops have a lower alpha acid percentage and an oil profile associated with good aroma. These hops are generally used as a finishing or conditioning hop. Alpha hops provide more bitterness, since they have a higher alpha acid percentage, and are generally used in the boiling process to extract bitterness. For reference, BSG CraftBrewing has an extensive list of hop varieties available in the U.S.

1. Hops help max out the bitterness scale.
The International Bitterness Units (IBU) scale is used to measure the bitterness of beer, provided by hops used during brewing. In today’s brewing world, the IBU range is typically anywhere from 0-1,000 IBUs. A light American lager might be as low as 5 on the scale, while a barley wine can range up to 100. For all of you IPA drinkers, these brews typically range from 40 or above. But, even if you drink a craft beer with 300 IBUs, you most likely won’t be able to tell the difference because your taste receptors can only pick up a maximum bitterness of 120 IBUs.

2. Hops grow on bines, not vines.
Unlike grapes that grow on vines, hops actually grow on bines. A bine is a climbing plant that climbs by its shoots growing in a helix around a support, compared to a vine which climbs using tendrils or suckers. On hop farms, they grow up heavy twine or rope, but in the wild they use other plants for support to get to the sunlight. 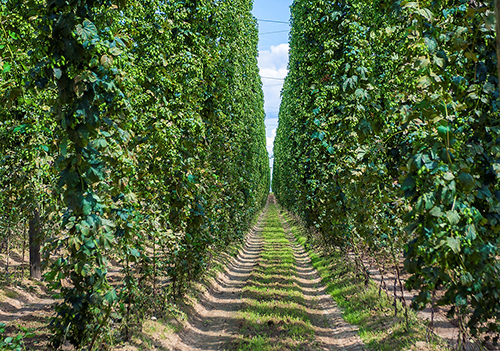 3. You won’t find hop seeds at your local greenhouse.
Hop farmers don’t use seeds to grow hops, because there’s a chance of growing a male plant. Hop cones only come from female plants, so the male plants are commercially worthless. Instead, hops are grown from potted plants or rhizomes (a modified subterranean stem of a plant, typically found underground). Hop breeders mate male and female plants in a controlled environment to create and test new varieties, hoping to produce new varieties that will create exciting flavors for brewers.

4. Hops are picky growers.
The sweet spot for hops is in-between the 35th and 55th parallels of both hemispheres where the hops get long days, hot summers, and just as important, cold winters. In winter, hops go dormant, concentrating all of their energy in their roots. The world’s major hop growing regions are found between these parallels from the U.S. Pacific Northwest to England, Belgium, and Germany in Europe, and New Zealand in the Southern Hemisphere.

5. Caution – hops are highly flammable!
The immense pressure created by the weight of hop bales and the high levels of alpha acids in some varieties of hops can make for a serious fire hazard. Spontaneous combustion is not uncommon in bales of hops. Some of you might remember the fire that broke out in the Yakima Valley of Central Washington in 2006, responsible for destroying approximately four percent of America’s yield of hops. The fire added to the 2007-2008 hop shortage, greatly affecting craft brewers.

6. You can’t eat them.
Consuming hops in any way, other than in your favorite craft beer, can give you an upset stomach and an awful headache. Your pets are at an even greater risk if they ingest hops, leading to high fever and possibly death.

7. Hops are a valid sleep aid.
Drinking too many IPAs can leave you feeling sleepy, but did you know that “hops under your pillow” is an old farmer’s trick for encouraging a good night’s sleep? More recent studies have taken a closer look at hops and their effect on anxiety and sleep disorders, which often go hand in hand. While the U.S. Food and Drug Administration doesn’t regulate herbal supplements, Germany's equivalent, Commission E, has approved hops to treat restlessness, anxiety, and sleep disturbances.

Today’s craft beer obsession has a lot to do with the wide range of incredible flavors derived from the different kinds of hops available. I can only believe the demand for hops will grow in years to come, and I look forward to drinking all of the unique styles and flavors that surface.