Beer is a perishable product best enjoyed as fresh as possible, sort of like milk. This is mainly due to one of beer's main ingredients: hops.  While some beers use tetra-hops, a hop extract that is resistant to light’s aging effects, many other brews start to degrade as soon as they enter a glass bottle or aluminum can.  Light, temperature, and oxygen cause the fragile oils from hops to break down, dulling their natural flavors and releasing byproducts that cause beer to taste skunky and stale. 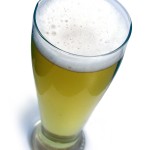 In a perfect world, everyone could get their beer fresh from the brewery's tap. Unfortunately, this is usually not the case.  Most buy their beer from a liquor or grocery store where beer's freshness can vary widely.  This is why some breweries have begun to put “bottled on” dates on their bottles, ensuring the customer knows the precise age of their beer.  Stone Brewing actually sells a beer centered on optimum freshness with the name “Enjoy by IPA,” putting an expiration date front and center on the label.  However, some breweries do not make it so easy, instead using their own code for the bottling date that isn't readily decipherable by the general public.  While it does not apply to all breweries, the code usually begins with one of the first 12 letters of the alphabet (A-L) to represent the month, the next four digits to mark the day and year, and the last two letters to indicate the state in which it was brewed. The website www.beerdates.com has an extensive list of how to decode each brewery’s code.

Many craft beers out there are simply meant to be enjoyed sooner rather than later, so don't wait- Carpe DiBeer.