Patience is a virtue. For certain craft beer styles, that same adage applies. While many craft beers are enjoyed fresh from the store or your local brewery, others benefit from aging, resulting in intensified flavor and greater taste complexities. But, cellaring your craft beer provides no guarantee that the beer will be any better than it was when it was fresh. If you are looking to cellar craft beer, there are some general rules to follow. 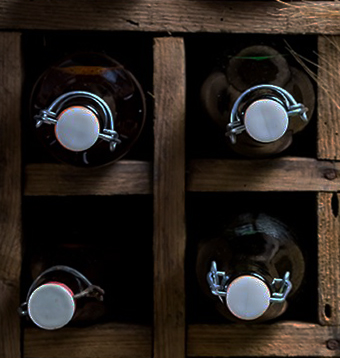 1. Use beers that have one of the three “S’s” – strong, sour or smoked. As a general rule, the beer needs to be at least eight percent alcohol, have some acidity, or be a smoked style.

2. Cellar your beer in a dark, cool place. Ultraviolet light reacts with compounds in beer to develop the dreaded skunk flavor, so you should keep all of your beer in the dark. The temperature in the room should range from 50 to 65 degrees Fahrenheit. Warmer temperatures speed up the aging process.

3. Taste the beer periodically. For the love of craft beer, if you suspect your brews aren’t aging well, drink them as soon as possible!

1. Oxidation
Oxidation is the exposure of beer to air, giving your brews a wet, cardboard flavor. In delicate beers such as light lagers, milds or Pilsners, oxidation can dominate the flavor and aroma. In hearty beers like strong Scotch ales, the fermented character can enhance the beers by adding flavor and complexity. Beer enthusiasts have long debated about the role bottle size plays in the aging process. Some believe that beer in larger bottles has less exposure to air in the head space, so the larger bottle reduces the risk of over oxidation.

2. Bacteria
Bacterial contamination can dominate a beer, giving it an unpleasantly, sour flavor and making it virtually undrinkable. However, there is no bacteria found in beer that is detrimental to your health. The sourness is usually derived from wild strains of yeast or bacteria as the beer is being fermented, which can eventually wreak havoc on the brew.

Some Beers that Age Well

Alaskan Brewing’s Smoked Porter – The dark, robust body and pronounced smoky flavor of Alaskan Smoked Porter is produced in limited “vintages” each year on November 1. Unlike most beers, this brew can live almost forever in a bottle, much like a fine wine. Over time, the smoked flavor backs off and the other flavors come through. Some beer enthusiasts online are enjoying vintages from their cellars dating back to the early 1990s.

Bell’s Brewing’s Eccentric Ale – This limited edition American Strong Ale is brewed with juniper berries, ginger, caraway seeds, coriander, maple syrup, molasses, horseradish root, and chestnut chips. Eccentric Ale is only available at the Eccentric Cafe and Bell's General Store on Eccentric Day, which happens to be on December 9 this year. This brew is known for its unlimited shelf life, so it makes a great cellar beer.

Three Floyds Brewing’s Dark Lord – This Russian-style Imperial Stout is only available one day a year (in April) at Three Floyds brewery on Dark Lord Day. Stay tuned to Three Floyd’s website for Dark Lord Day 2017. If you can get to Munster, Indiana on this special day, grab a Dark Lord and stick it in your cellar.

Trial and Error
There is no set time period for aging beer. As a general rule, you should allow beer to age at least one year. If you are storing several bottles of a brew, open them at one year, five years and ten years to see what works best. Beer aging isn’t an exact science.

Cellaring is a personal journey, and a unique craft beer experience. Many cellaring enthusiasts enjoy the complexity that proper aging can add to craft beer. Remember, the key to cellaring is to control as many of the factors mentioned above to ensure the beer is aging properly and not just getting old.