As the craft beer market continues to expand, people are finally beginning to realize just how flexible and complex beer can be. Now more than ever, restaurants and individuals are starting to view beer not just as a working man’s brew, but something that can be paired with fine dining. Its complex and exotic flavors along with unique and premium packaging (like a corked 750 ml bottle), have many asking the same question: Instead of wine over a candle lit dinner, why not beer?

One of the best predictors of a wine’s character is the region in which its grapes are grown. The soil in different regions imparts unique flavors to the wine. Our favorite ingredient in beer, hops, also has different varieties, each with its own distinctive flavor. One of the most popular varieties of hops, Cascade, is usually described as being floral and citrus-like and is used in craft beers like Sierra Nevada’s Pale Ale. Contrast Cascade with the very different Summit, possessing earthy and spicy flavors, and distinctions between hop varieties become clear. New varieties of hops are always being created, each with their own unique characteristics. These differences in hops add exponentially to the number of beer styles that can be made from them. Included in the general Ales, Lagers, and Stouts are hundreds of sub-varieties like India Pale Ale, Bock, and Milk Stouts. Then of course there are new beers being brewed every day by innovators like Flying Dog, who infuse a stout with the bold flavors found in oysters. The diversity of craft beer makes for interesting and unique food pairings, with a beer to either compliment or contrast nearly every dish. 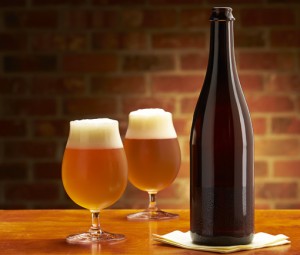 It is not just the flavors of beer that are changing; the bottles it comes in are changing as well. The longtime standard of 12 oz. is being joined by larger format bottles like our 750 ml bottle “Celebration” and 22 oz. bottle “Bomber”, illustrating the increasing number of ways beer is enjoyed. Instead of having a single 12 oz. beer to wind down after work, you might pop the cork on a 750 ml bottle with a friend over dinner. Breweries are also starting to focus more on using premium ingredients like cacao nibs and imported honey with this new, larger format, or aging the beer in whiskey barrels. These beers are meant to be experienced as much as they are meant to be drunk.

We’re happy that craft beer is finally starting to get recognized not just as a tasty drink to have with friends on a weekend, but something that can be paired with a five-star restaurant meal. The growing similarities in the format and formula of beer and wine are beginning to make the two interchangeable at almost any occasion